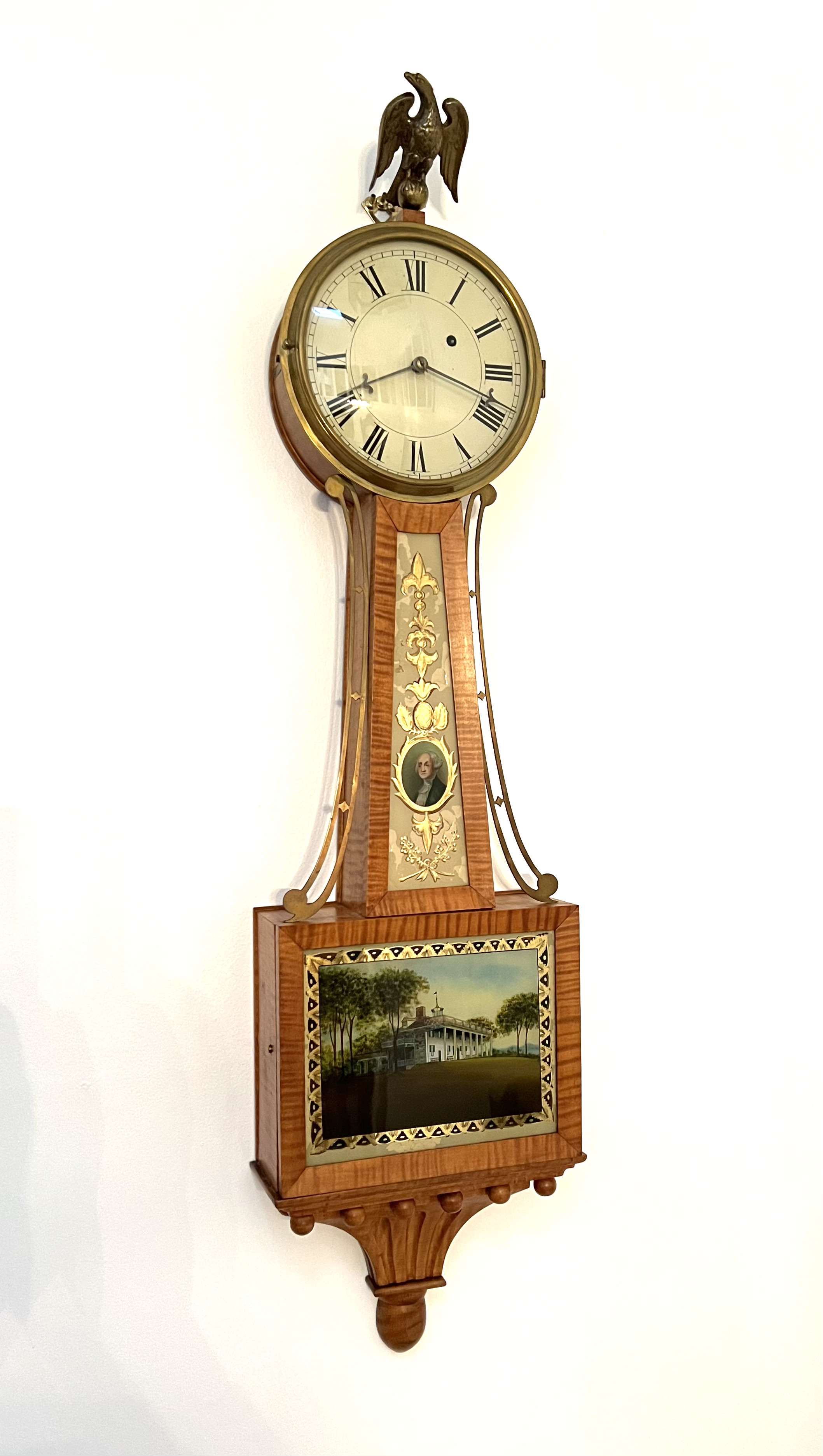 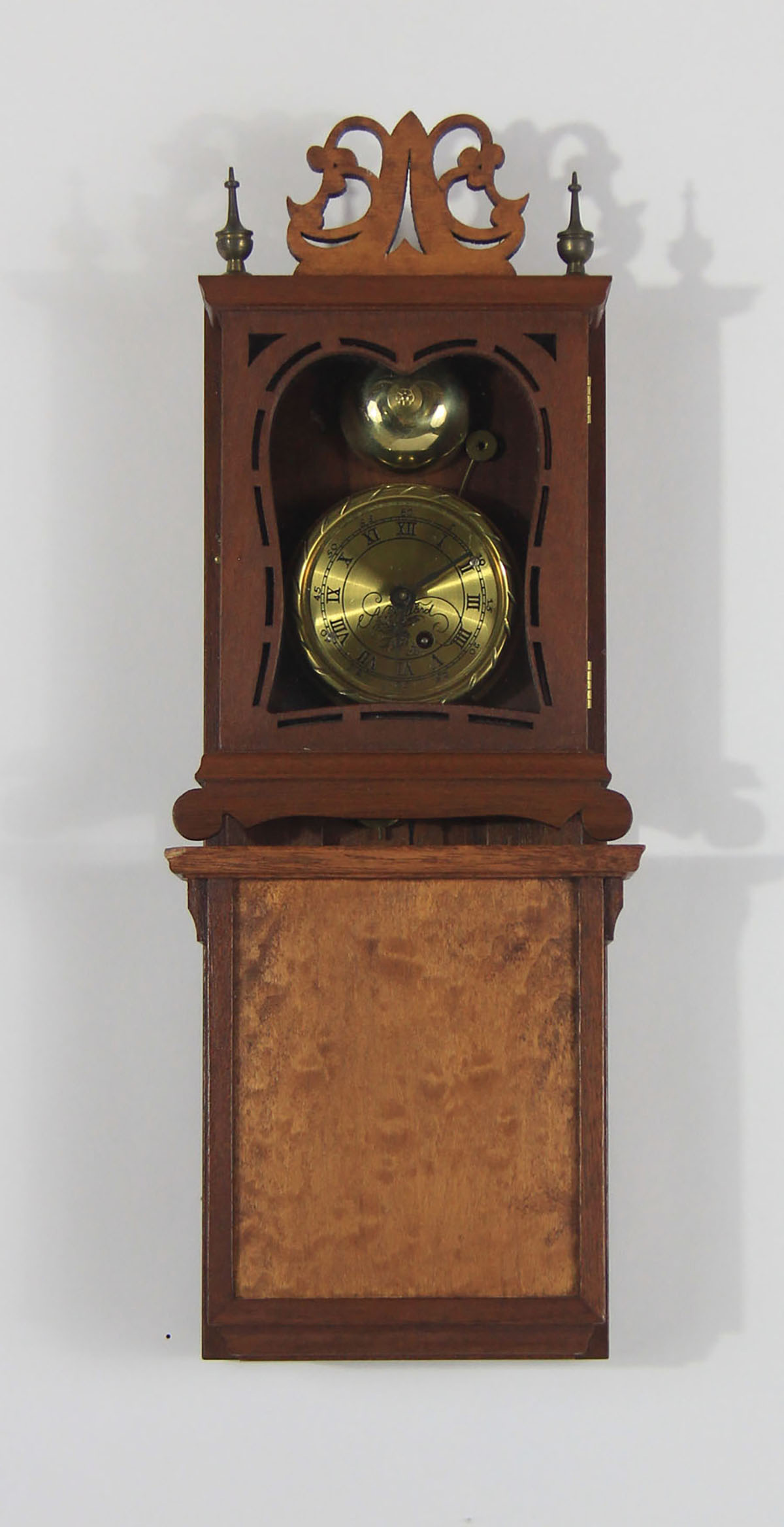 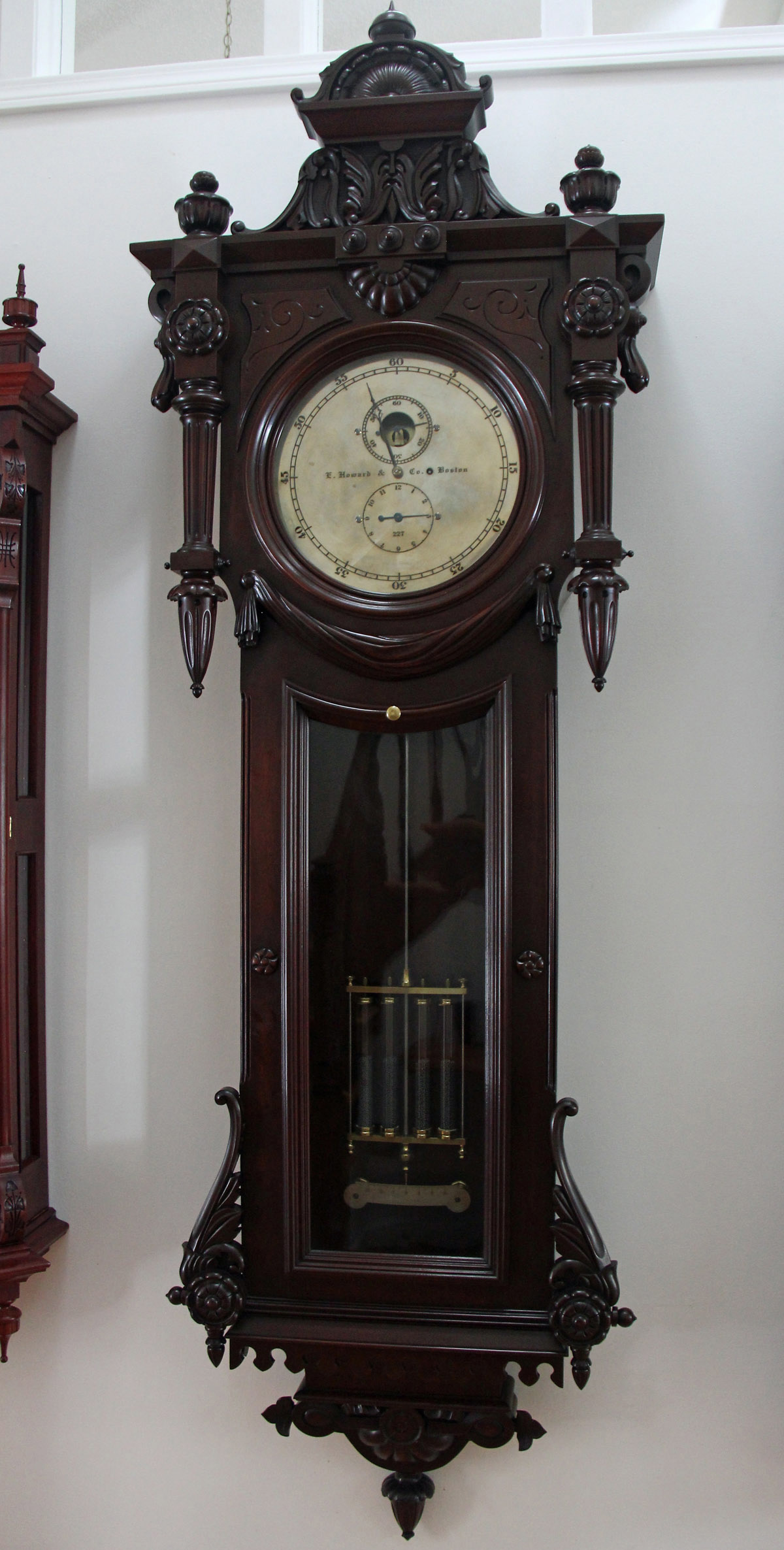 Reproduction E. Howard No. 49 Astronomical Regulator. The original E. Howard astronomical regulators have soared to prices that are out of reach for most collectors. This fine quality reproduction is a compelling alternative at a tiny fraction of the price. The highly carved and beautifully finished mahogany case is 91" tall, 30" wide and 10" deep. The engraved and silvered brass dial is 16" in diameter and is 1/8" thick. The steel hands are blued. The E. Howard signed movement has jeweled pallets. The 4 jar mercury pendulum is in the style of the original Howard pendulum but is a reproduction. The glass jars of the pendulum have lead shot instead of mercury but mercury could be substituted to provide the temperature compensation of the original pendulums. The beat scale in thick brass, finely engraved and silvered. As expected the clock is a fine timekeeper. 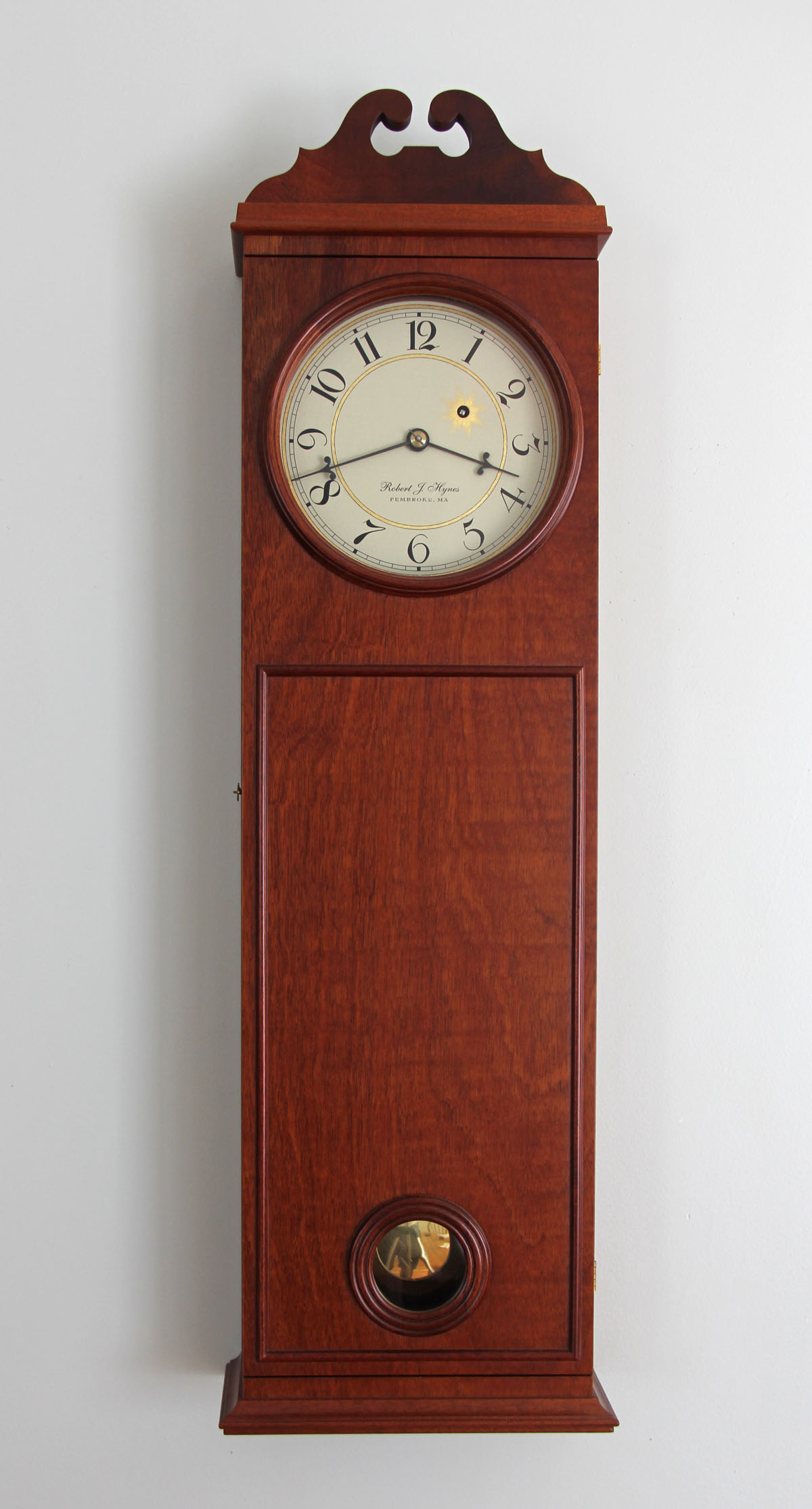 Robert Hynes, Pembroke, MA Shaker Coffin Clock. In the tradition of Foster Campos, Bob Hynes continues to produce superb quality reproductions of early American wall and shelf clocks. This very fine Shaker Coffin Clock is an example of his uncompromising attention to detail. The case is marked #3-09, dating the clock to 2009. The movement is by David Lindow, who is well known for his equally uncompromising movement work. A very fine timepiece. 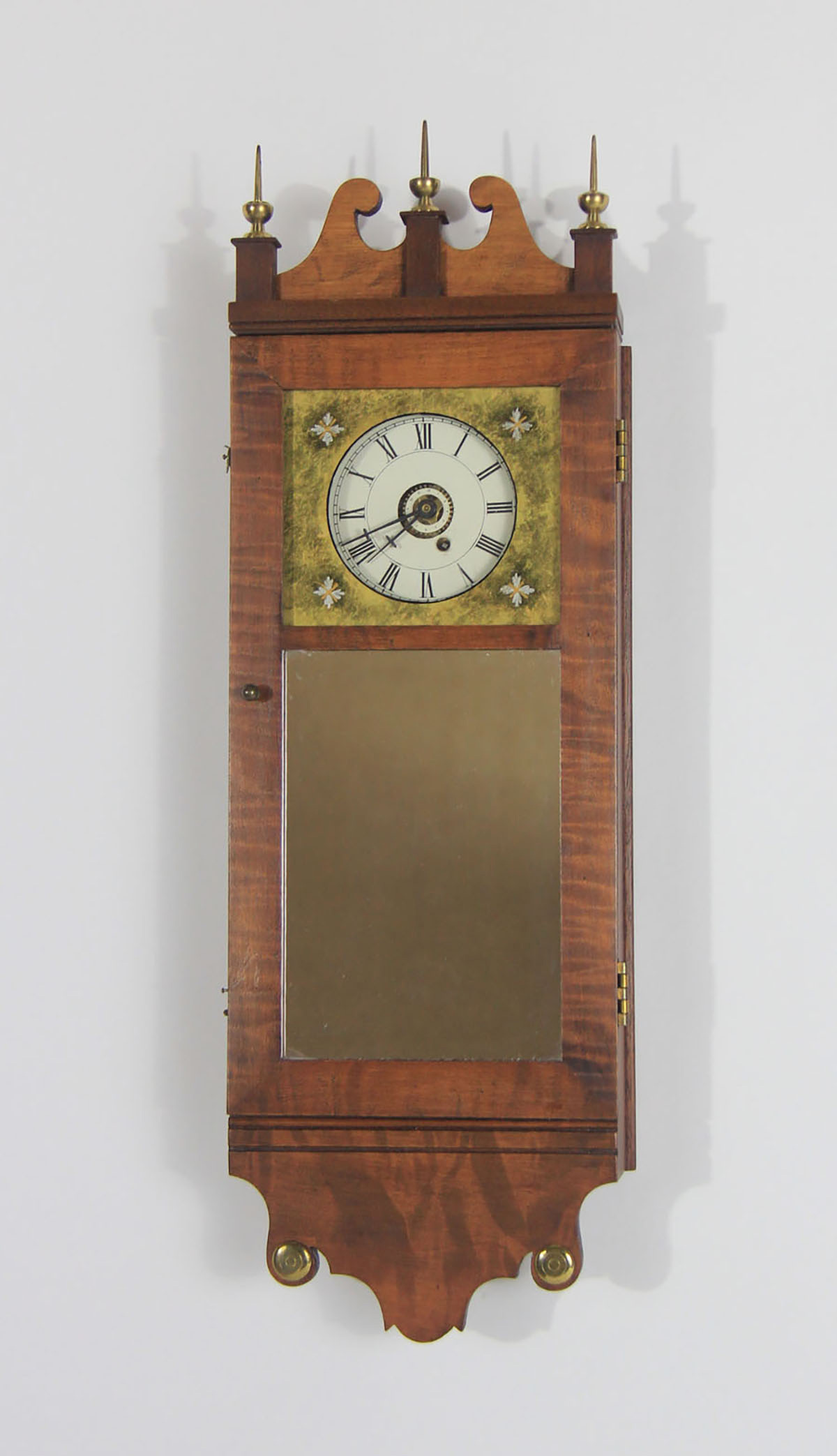 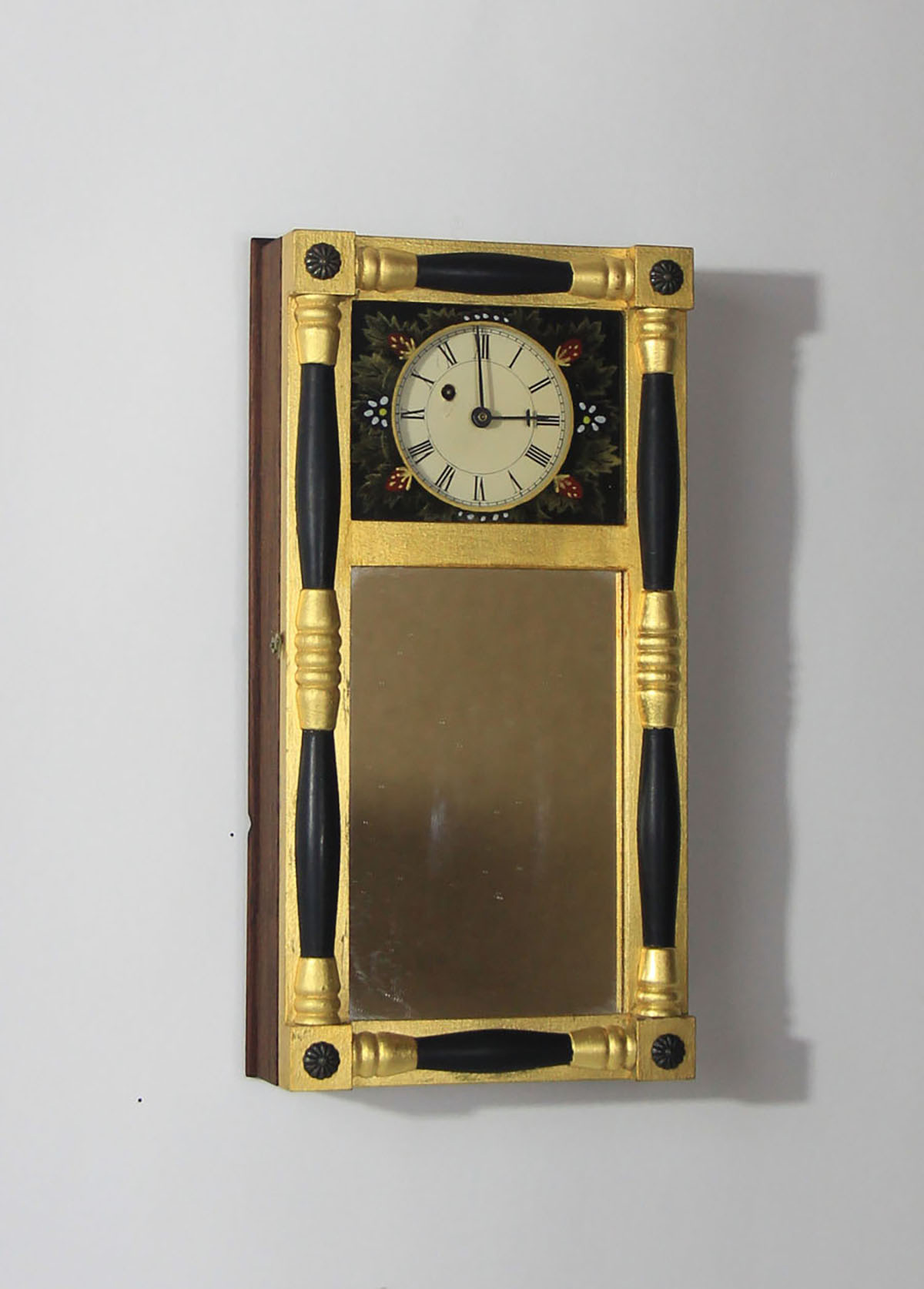 Michael Paul Miniature New Hampshire Mirror Clock - Ca. Only 10" tall with a 2 1/4" dial, weight driven wheel barrel movement and the same look as the full size clocks. #5 of 16. This is a superb miniature clock. 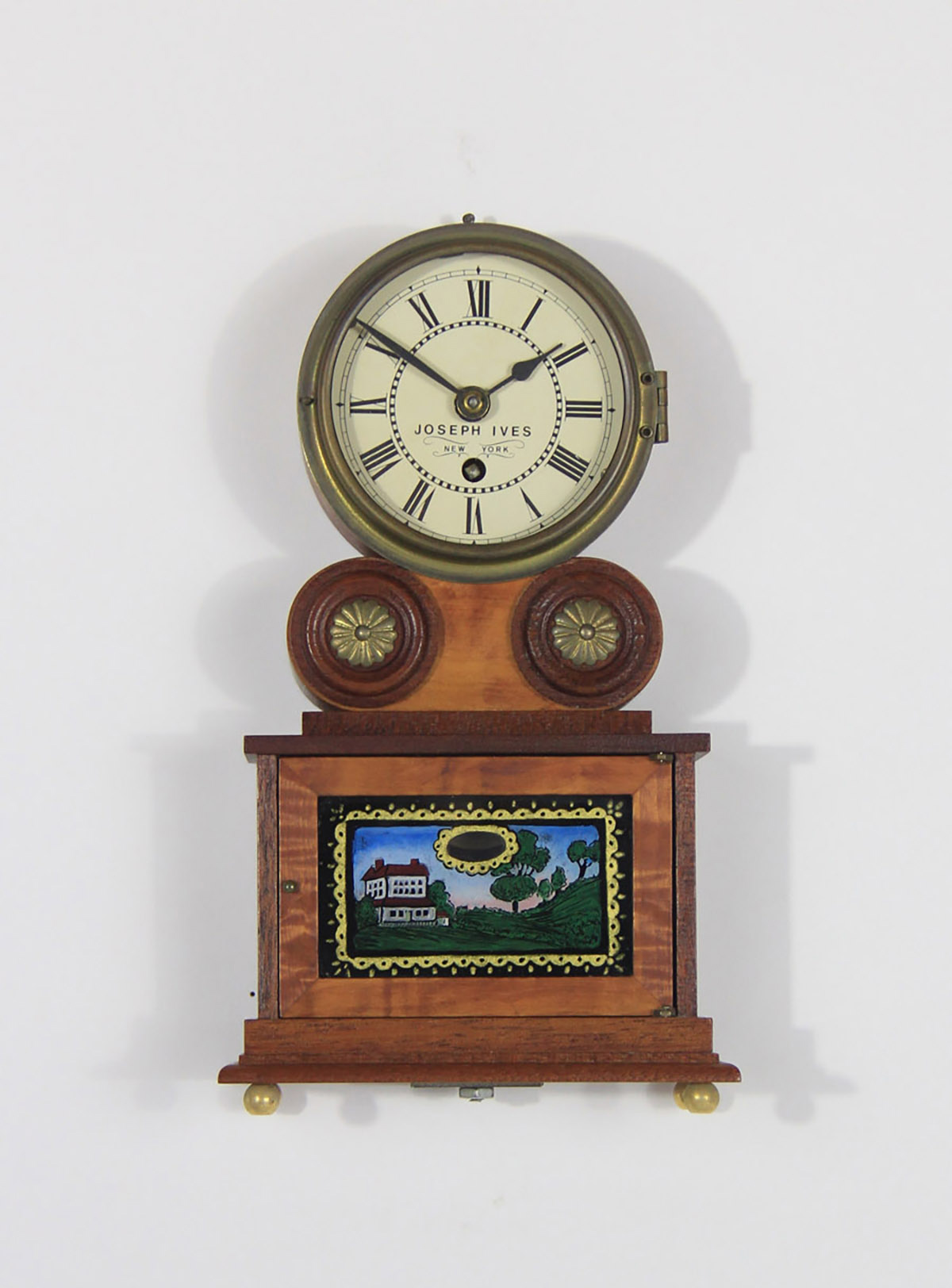 Robert Hynes Willard Banjo Clock - A superb clock in every way. In as new condition. #2-10 dates the clock 2010. The case is exquisitely executed with crossbanded frames and string inlays. The Moberg signed glasses are reverse painted and gold leafed. A very beautiful clock. Note that I have the identical clock by Foster Campos on my website along with a presentation banjo clock by Campos & Hynes.

Rudolf Till Grand Sonnerie Vienna Regulator. Till was a student at the famous clockmakers school in Karlstein, Austria, which still exists today. He finished the school in 1886. See the link below. http://uhrenhanse.de/sammlerecke/ausbildung/karlstein/karlstein7.htm Each student produced his "masterpiece" clock at the end of his training. This completely hand made clock is Rudolf Till's masterpiece. The clock is in mint original condition in every way. The walnut case is 50" tall, 17" wide and 8 1/2" deep. The dial which is marked with the name of the school and Rudolf Till's name is in perfect codition with no hairlines. The clock is in good running order, keeps good time and strikes properly.

Samuel Kralik Grand Sonnerie Vienna Regulator of 6 Week Duration. Samuel Kralik was born in Besztercebanya (originally Hungary now part of Slovakia) in 1815 and from 1828-1834 he was apprenticed to Lehrling, a Viennese clockmaker. On May 14, 1843 he became a Master Clockmaker and in 1851 was the only Austro-Hungarian clockmaker to be shown at the Great Exhibition st Crystal Palace. In the following year he became a member of the Academic Nationale in Paris. He exhibited in Munich in 1854, London 1862, Kesmet 1872, Vienna 1873, Paris 1878 and Budapest, his home, in 1885. In 1862, at the age of 47, he was appointed Clockmaker to the King of Hungary and some 13 years later he gained a Gold Medal and became Clockmaker to the Austrian Kaiser Franz Joseph I. This ca. 1870 clock is a superb example of his work. The ash case is 71" tall. The perfect 9 1/4" dial is signed Kralik S, Pesten. The back of the case has 2 paper labels with the name Samuel Kralik and much additional information. The superb movement runs and strikes for 6 weeks keeping extremely accurate time. An exceedingly rare long duration striking Vienna regulator.

Seth Thomas Regulator No. 19. Ca. 1885. The clock has the features of the very early Seth 19’s. The walnut case has the tulip pattern carving on the door. The dial is attached to the wood dial surround not to the movement as in later 19’s. The pendulum has the smooth glass jars seen on early examples. The case has the original finish that has just been lightly rubbed and waxed. The 2 bottom finials are new and exactly as original. The dial is in amazing untouched original condition. The hands are original. The pendulum is original with original gilding in age appropriate condition. The weight is also original. The movement, which is stamped 19 & 255, has been serviced and the clock is keeping excellent time.